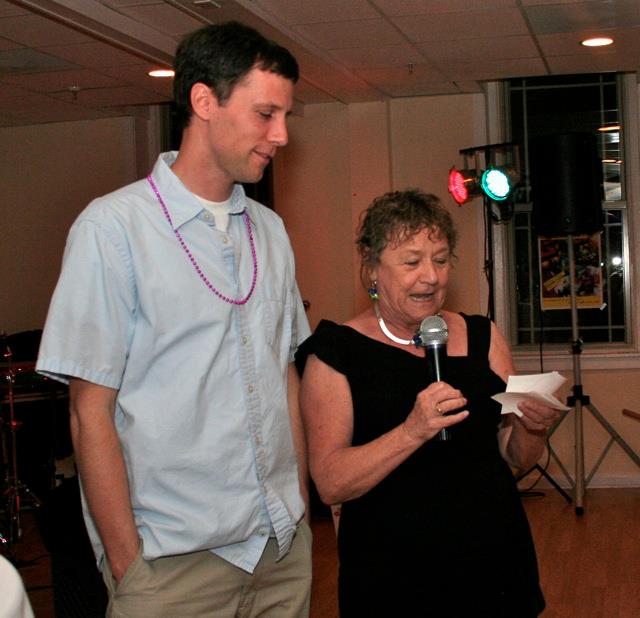 For its third annual Marjorie S. Lednum Award for Outstanding Volunteerism, Cambridge Main Street has chosen a recipient who has contributed in a variety of ways, from tree planting to technical support. Brian Roche often chooses to work quietly and avoids the spotlight for his efforts, but has long stood at the forefront for difference making initiatives within the city of Cambridge, earning him this year’s volunteer distinction.

Most recently, Roche provided technical support for a downtown security camera program, which drew a lot of public attention after a string of armed robberies in downtown Cambridge late in 2015. Coincidentally, Cambridge Main Street will be raising funds to expand this security camera program at its Spring Fling event on April 9 at the Choptank River Golf and Events Center, where Roche will receive his award.

“Brian is an interesting guy, because he has an undying commitment to the heritage and ecology Cambridge, but also an incredible desire to keep downtown Cambridge current technologically,” said Cambridge Main Street Executive Director Brandon Hesson, pointing out that Roche raised the funds and installed the Cambridge Main Street public WiFi network several years ago, while he was also an important part of working with the city to redesign the parking lot behind Chesapeake College to add Green improvements and bio-retention areas.

“The namesake of this award was a special person, who gave her time to Cambridge Main Street in a variety of ways to drive change, not just tag along for the ride,” continued Hesson. “Brian and all of the past winners of this award are the same kind of people, and they are very unique.”

Roche is the former chair of the Cambridge Hisoric Preservation Commission, and was among the early leaders of the Cambridge Main Street Green Team, which took over a Chesapeake Bay Trust Grant to install tree wells and 25 native trees in and around downtown Cambridge and along the Maryland Avenue gateway. He later co-applied with the city of Cambridge to install bike lanes and bike sharrows in and around downtown, and worked with the Dorchester County Visitors’ Center and the State Highway Administration to build a bike and pedestrian link to downtown on Woods Road.

Once cyclists got into town, they had safe places to keep their bikes due to Roche’s collaborative effort with the Dorchester Career and Technology Center, which produced custom bike racks at Stoked and RAR Brewing. His non-profit organization Choptank Heritage Trail purchased additional bike racks that currently stand at High Spot, Jimmie & Sook’s and The Wine Bar.

“Cambridge Main Street is defined by geographical boundaries, but our successes and failures have impact outside of those imaginary lines,” said Hesson. “Brian has always understood that we are equally effected by things outside of our Main Street district, and kept a focus on things that sometimes get off our radar, like gateway projects and improving safety for pedestrians and cyclists, who also want to enjoy downtown Cambridge.”

These efforts proved to be prophetic. The selection of Cambridge to host IRONMAN Maryland has increased the city’s visibility among a group of visitors interested in experiencing things outside of a car, and often choose to walk or bike into town.

Cambridge Main Street’s primary mission of economic development also benefited from Roche’s involvement. He serves on the city’s Economic Development Steering Committee, and participated in the Rural/Urban Design Assistance Team (RUDAT) as well as the development of the Waterfront 2020 plan. He also created a petition which garnered 1,600 signatures in support of changing legislation restricting the sale of alchol within 300 feet of a church, which proved critical to the city’s evolution as a culinary destination. He was also integral in th early stages of convincing the Dorchester County Council to remove the excise tax on residential development downtown.

Spring Fling tickets are $65 and can be purchased at www.cambridgemainstreet.com, or by calling 443-477-0843. Heavy appetizers will be served by The High Spot, and live entertainment will be provided by What’s Next, which was named ‘Best Party Band’ by Baltimore magazine in 2013, 2014, and 2015.