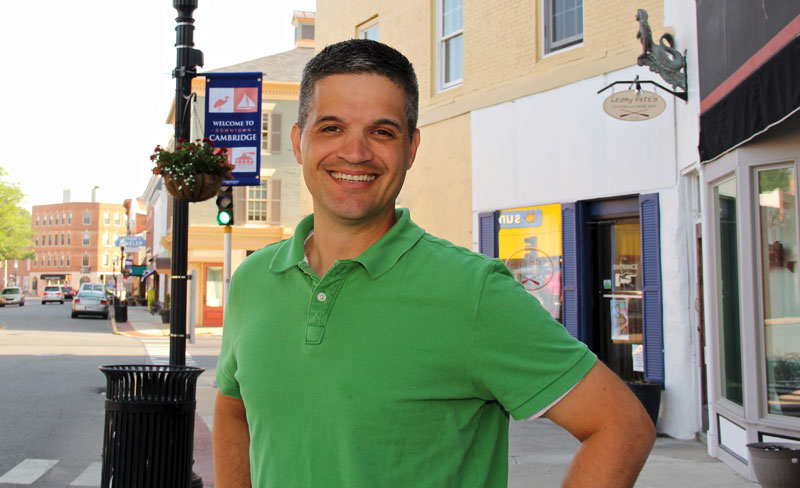 Brandon Hesson announced today that he will step down as Executive Director of Cambridge Main Street, and accept the position of Associate Director of Economic Development for the City of Cambridge, after nearly two successful years heading the non-profit organization tasked with the economic revitalization of the downtown Cambridge.  The transition will take effect on April 9, after Cambridge Main Street’s Spring Fling fundraiser at the Choptank River Golf and Events Center.

“I’ve been very fortunate to work with incredibly versatile board members, business owners, volunteers and community leaders while with Cambridge Main Street,” said Hesson. “I’m not moving on, just moving forward into a role that will allow me to continue to make a positive impact for our entire community, not just here downtown. The Cambridge Main Street district is still a very important part of my new position,” he continued. “The relationships I’ve made here will continue to be critical.”

Hesson began in July 2014, one week before Cambridge Main Street’s flagship event Taste of Cambridge, and only two months before IRONMAN Maryland first ran through the streets of downtown Cambridge. That December, he built Cambridge Main Street’s first Crab Basket Christmas Tree, which became an annual tradition when built again in 2015, and has garnered attention across the state, appearing in the The Washington Post and was the catalyst for Cambridge being named among the “Top 12 Christmas Towns in Maryland” by OnlyInYourState.com.

Hesson appreciates the compliments he receives for the Crab Basket Christmas Tree, and says one his most endearing memories is when then governor-elect Larry Hogan had his picture taken in front of it with wife Yumi during a holiday visit with Comptroller of Maryland Peter

Franchot. However, he is quick to point out that the tree was a collaborative effort and the result of a brainstorming session with downtown business owners and board members.

“I started in the middle of what felt like a million massive and very high-profile events. I learned pretty early that if I was going to succeed, it was going to require the input of our business owners and volunteers,” Hesson remembers. “We’ve taken that philosophy and used it to expand our ability to provide unique promotional events downtown.”

In 2015, Cambridge Main Street partnered with downtown businesses to hold IRONFEST, an entertainment alternative with food and live music for IRONMAN Maryland spectators, and collaborated with the Dorchester Citizens for Planned Growth and Midshore Riverkeeper Conservancy to bring the Wild & Scenic Wildlife and Adventure Film Festival to Cambridge in the Fall. During the holidays, Cambridge Main Street worked with businesses to promote Miracle on Poplar, a toy drive which collected Christmas presents for 75 needy children in Cambridge.

Cambridge Main Street will unveil a new website at its Spring Fling event on April 9 at the Choptank River Golf and Events Center, funded by donations and a grant awarded by the Maryland Heritage Area Authority. Proceeds from this event will help expand the downtown security camera program Hesson pulled together in December of 2015 with the help of service providers Bay Country Security and Bay Country Communications. Spring Fling tickets are $65, and can be purchased at the groups website – cambridgemainstreet.com.

“Brandon has been a constant source of creative energy that has brought a lot of positive attention to our city in a relatively short period of time,” said Cambridge Main Street board president Tom Hutchinson. “His work has built on the efforts of previous directors, and continued to improve the downtown commercial environment. I’m excited for him and his family, as well as for the City of Cambridge for recognizing his capabilities and the impact he has had in our community. It is a great feeling to know that we helped shaped a great career path for Brandon. It’s nice to see when hard work pays off.”

The search for a new Executive Director begins immediately, and candidates can find a detailed job description HERE.