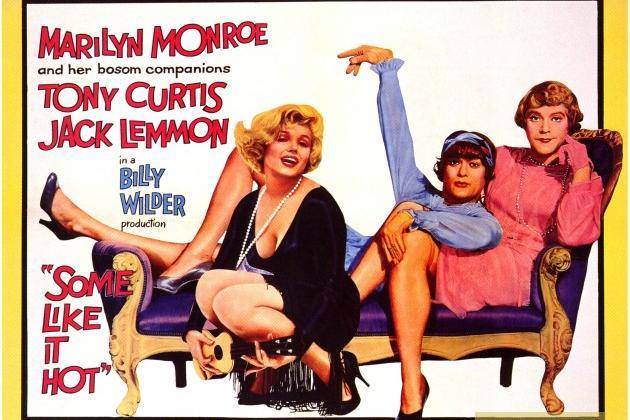 Join us for our FIRST downtown OUTDOOR Movie Night! The feature of the evening will be “Some Like It Hot” featuring Marilyn Monroe, Tony Curtis, and Jack Lemmon.

Here is what you need to know!

Joie de Vivre: A Classic Movie Survival Guide- Some Like it Hot

by Juliette Michaud and Jean-Paul Chaillet May 11, 2020

Nobody’s perfect but Billy Wilder, Marilyn Monroe, Tony Curtis, and Jack Lemmon achieve near perfection with Some Like It Hot, a masterpiece of effervescent comedy than can be seen and seen again with no moderation. The best prescription in our confined times.

In 1929, Joe and Jerry, two out of work musicians must hide from Chicago mobsters after inadvertently witnessing their involvement in the St. Valentine Day’s massacre. Fearing for their lives, what better way to be safe than joining an all-girl jazz band on a train bound for Florida…disguised in drag as Josephine and Daphne.

“It will be a disaster,” producer David O. Selznick warned Billy Wilder. “You cannot combine comedy and murder.”

But that is exactly what the Sunset Boulevard director did. Using the 1935 French farce Fanfare d’amour and its 1951 German remake, as the basis for a new script co-written with his accomplice I.A.L. Diamond. The result? A quite daring comedy for the conservative Eisenhower era, when Hollywood in the late 50s was trying to reinvent itself in that genre after a long dry spell. A highly entertaining cocktail mixing cross-dressing, sexual innuendos, non-stop high jinx, genre-bending shenanigans, and an homage to the gangster movies from the thirties (with George Raft for added reference to the period.)

Mitzi Gaynor was considered for the role of ukulele playing singer Sugar Kane Kowalczyk. But when Marilyn Monroe, who had worked with Wilder in The Seven Year Itch four years earlier, showed interest, the part was retailored for her. She was in on the joke, playing with her image as a dumb blonde that had been her trademark. And she makes a memorable screen entrance in the film, sashaying on the platform before boarding the train, suddenly startled by a burst of steam whistling at her backside.

Eschewing her usual strict contract clause to only be photographed in color, Marilyn is glowing, thanks to the silky black and white lighting of master cinematographer Charles Lang and sultry costumes by Ory-Kelly. Oozing crystalline sex-appeal like no one else, she is at her most touchingly magnetic and sensual, as she coos the immortal Poo poo pee doo from I Wanna Be Loved By You. Many times imitated, never surpassed.

As her co-stars on high heels, screamingly funny Jack Lemmon (in a part initially intended for Frank Sinatra!) and heart-throb Tony Curtis are the epitome of comic timing and irrepressible chemistry. Among so many highlights: Lemmon as Daphne playing the maracas in ecstatic delirium or dancing the tango with the unflappable Joe E. Brown who gets the memorable “nobody’s perfect” punchline in the closing scene. Hilarious also, Curtis pouting lips as Josephine or his imitation of Cary Grant’s clipped speech pattern when posing in another funny disguise, as the aloof millionaire Junior, to better woo Sugar.

Filming was a challenge,  notoriously caused by Monroe’s tardiness and her inability at times to remember very simple lines, requiring in some instances, up to more than thirty takes to say “It’s me, Sugar” or “Where’s that bourbon.” Wilder’s patience was often put to test but in the end, only the result counted.  With its fast-paced tempo, scintillating dialogues, and perfect casting, Some Like it Hot is still irresistibly funny, 61 years after it was first released. And, under the varnish of quintessential entertainment, a more relevant than ever anthem in praise of acceptance and difference.

The film won three Golden Globes. Best Comedy, Best Actress in a Comedy for Marilyn Monroe and Best Actor in a Comedy for Jack Lemmon. And it still tops the American Film Institute list for best comedy of all time.